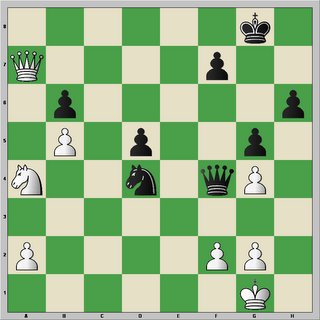 Black to play and eventually checkmate white (or force white to sacrifice his queen to defend).

This puzzle is probably good for about the 1100 rated player, although anyone can solve it. Look for the answer in the "comments" area.

This is a game where I am White. I am playing against my coach at the time, International Master Rade Milovanovic. He is the first coach of the University of Texas at Dallas chess team and has been there ever since. I was a freshman in college when he joined the team. During that year our team was a lot different than it is now. For one thing, we only had about six masters total. We only had the man-power to send one team to tournaments. Now University of Texas at Dallas often sends three strong teams to tournaments and could send five if they wanted to.

Rade helped our team win several National and Pan-American chess championships. I not only thought of him as my coach, but also a close friend. He would often invite members of the team over to his house for wonderful dinners cooked by his wife. We used to have long discussions about things such as his career as a chess player in war-torn Yugoslavia, or simpler things such as "World Wrestling Entertainment". He was always laughing and joking, so he put the chess team at ease during critical times in tournaments.

He is also a very strong chess player. Recently he won a very large prize in the "HB Global Chess Challenge tournament" in Minneapolis. This is the biggest open tournament in America and it had a $500,000 prize fund. I saw Rade at the State Championship held in Houston a few months ago. He was coaching University of Texas at Dallas players in the collegiate section. I was telling him about how I plan on playing chess very seriously again, but I am concerned that I might not do well because I am rusty. He encouraged me by telling me how he played almost no chess in the year before he won his prize in Minneapolis.

I like his playing style very much, and it is somewhat similar to mine. He plays in a very simple, solid manner but with a very keen eye for tactics. This is kind of like how the former World Champion Tigran Petrosian plays (he is possibly my favorite world champion). Rade has a very good understanding of positional chess, and he can play many different openings because of it. I would never know what opening to prepare for when I played him. He is a very good blitz player because of his great positional understanding. This goes to show you that you do not need to play complicated tactical chess like Gary Kasparov to be a strong chess player. If you just have a very good positional understanding then you can do well.

In the "puzzle" position, I am playing White. Out of the opening I achieved a small advantage in a variation of the Queens Gambit Declined. I held this advantage for much of the middle game, but he very calmly defended. I used to have a serious weakness that is common among many players strong and weak. If we let an advantage slip away, we then start to play worse. Alex Yermolinsky addresses this psychological issue very carefully in his "trends and turning points" chapter in Road to Chess Improvement. Let me give you a hypothetical example of this happening:

You are up a pawn for most of the game. You now blunder two pawns back. You become very discouraged. Instead of being ahead one pawn you are now down one pawn. You now start to make more blunders, and you defend the endgame lazily. You then go on to lose the game very fast, even though there was still a lot of fight left in the position.

Yermolinsky uses graphs to demonstrate that more mistakes happen right after a player makes an error that changes the nature of the game. This chapter in his book has helped me improve a lot. In my opinion, the best way to solve this problem is to simply understand that the problem exists (I believe Yermoinsky says this too). If you are playing a game where you just made an error that gives your opponent an advantage (or you simply lose your advantage), take a little break. Get up and walk around if you have to. Remind yourself that you might (and probably will) start playing worse because you are shaken up psychologically. Once you admit that this might happen, remind yourself that you do not have to play worse. Make a very conscious effort to play the rest of the game to the best of your ability. Go back to your game and forget the past, and play it as if it were a brand new game.