There is a great new book about chess and education. It is titled "Children and Chess: A Guide for Educators". It is written by Womens International Master Dr. Alexey Root. She teaches a course on chess and education at the University of Texas at Dallas. She also writes regularly for many chess magazines, including Chess Life. This book will be beneficial to anyone who is curious about learning chess, or helping someone else improve.

If you use the special discount code "F238" the price will be $20 instead of $25.
Posted by Jeffrey Ashton

Lately I've been way ahead of my 2 hours a week goal of studying. I've been studying for close to 1 hour a day. 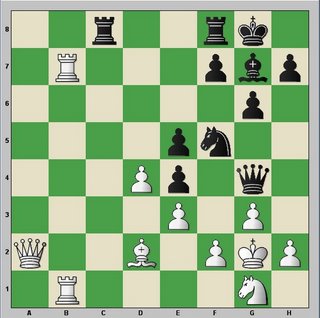 I worked with Ben Finegold today over the phone. He showed me some of his games and tried to give me some general advice on how to play better in tournaments so I can beat players stronger than myself. I hope to win my section in the National Open, and qualify for the U.S. Championship. I think I have good chances of winning my section, but the odds are against me of qualifying for the U.S. Championship. Who knows, maybe I will get lucky.

I played an internet game later where I played very well. I checked the game with Fritz after the game was over, and I played pretty much perfectly, which is rare for a such a short time control (especially when I am playing). My performance rating is very high with the English opening, and I think I will try to learn it better.

The position on the diagram is White to move and get a winning advantage. For the whole game, click here.

Right now my Internet Chess Club "5-Minute" rating is 2281. That does not sound very high, but that actually ranks me as the current 102nd best 5-minute player on ICC, which I am kind of proud of because there are over 30,000 members.